Lucy McMahon (PhD Researcher at University of York, specialising in blue carbon habitats) shares her knowledge on seagrass and its carbon capturing capabilities.

Spurn Point, at the very tip of the Humber Estuary, was once covered in a sprawling, lush green carpet of seagrass – a special and previously abundant carbon capturing coastal plant found along shallow and sheltered areas of the UK’s coastline.

Throughout the UK we have lost 92% of our seagrass meadows, with almost half of this loss occurring since the 1980’s. However, over the last 2 years, the Marine Team at Yorkshire Wildlife Trust have been working to restore the meadow at Spurn Point Nature Reserve back to its former glory. Why are we doing this? Because seagrass is immensely important!

An unexpected ally in the fight against climate change…

Seagrass meadows occupy less than 0.2% of the world’s oceans, yet are responsible for 10% of organic carbon buried in marine sediments annually. These habitats might seem small, but they are mighty – per unit area, seagrass meadows can capture and store more carbon than tropical rainforests!

Seagrass plants capture carbon via photosynthesis to provide the fuel they need for growth and reproduction, but it can also be trapped from the water as carbon particles when waves wash over the meadow surface. Unlike trees, when seagrass plants die, the stored carbon does not get released back into the atmosphere as carbon dioxide. Instead, dead plant material becomes buried in sediments on the seabed. If seagrass habitats are left undisturbed, this carbon can remain buried for millions of years, helping to lessen the impacts of climate change.

Sadly, this humble habitat is among the most threatened in the world. The equivalent of one football field of seagrass disappears every 30 minutes with poor water quality and damaging seabed activities mostly to blame. As tremendous carbon stores, any degradation to the habitat can result in huge losses of carbon dioxide back into the atmosphere, making seagrass restoration fundamental in allowing the capture of new carbon, and preventing the release of ancient, stored carbon.

A ‘triple win’: for climate, for biodiversity, and for people

Protecting and restoring seagrass meadows, and other coastal habitats, is not only a critical step for climate action, but a ‘triple win’: for climate, for biodiversity, and for people.

The plant’s green blades support a variety of marine life searching for shelter and food; they act as a nursery ground for commercial fish species like cod and sea bass, whilst brent geese and wading birds, who travel long distances to Spurn, utilise the meadows as feeding grounds.

Coastal communities benefit from healthy seagrass meadows too! As waves approach the shore, seagrass blades sway back and forth, acting in unison to slow tidal currents and reduce wave energy. Not only that, the intricate root system running beneath the sediment surface helps to stabilise the seabed, protecting the coastline against erosion.

Seagrass meadows have also been reported to provide a rather novel benefit to marine life by trapping plastics before they can flow into the coastal ocean where it poses a significant threat.

The United Nations Decade on Ecosystem Restoration (2021 – 2030), which aims to prevent, halt and reverse the degradation of ecosystems on every continent and in every ocean, provides a crucial opportunity to address both the biodiversity and climate crisis. Our seagrass restoration project at Spurn Point nature reserve is one way to do this.

In September, around 30,000 seagrass seeds were sustainably and carefully collected from healthier parts of the meadow, and already 3.5 acres have been planted. We are looking forward to next year as we plant seed bags that contain more mature plants over an additional 5.5 acres in the spring, and continue to monitor the seedlings.

As an island nation with the potential to be saturated with seagrass meadows along our coastline, restoration projects like ours at Spurn are vital to ensure these beautiful meadows can flourish, whilst helping to tackle climate change, protecting our coastline and boosting wildlife. 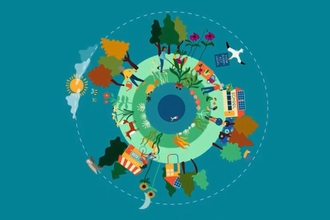 Find out more about COP26, why it matters and how it affects Yorkshire. 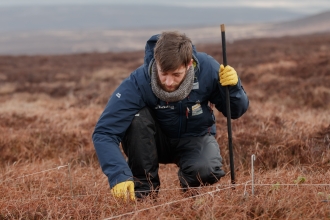 Restoring Yorkshire's peatlands, one hectare at a time...

As winter rears its head and waggles its furry ears, we are preparing for the start of our restoration season here at Yorkshire Peat… 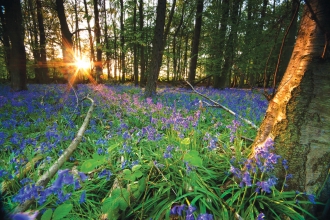 Become a member today and help us protect, restore and enhance Yorkshire's wildlife and wild places.

Restoring Yorkshire's peatlands, one hectare at a time...

As winter rears its head and waggles its furry ears, we are preparing for the start of our restoration season here at Yorkshire Peat…

How a traineeship is helping to kickstart my career in conservation

Andy Jayes, Native Oyster and Seagrass Restoration Officer, tells us more about the dancing meadows of green beneath the waves...